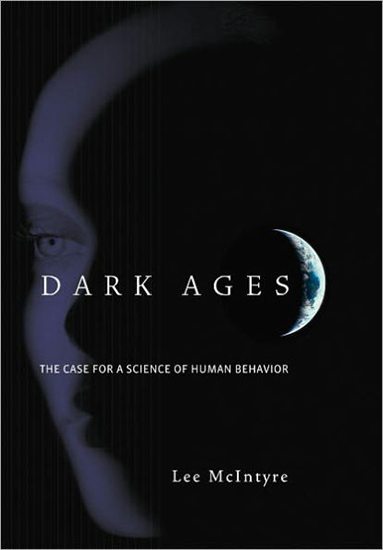 The Case For A Science Of Human Behavior

During the Dark Ages, the progress of Western civilization virtually stopped. The knowledge gained by the scholars of the classical age was lost; for nearly 600 years, life was governed by superstitions and fears fueled by ignorance. In this outspoken and forthright book, Lee McIntyre argues that today we are in a new Dark Age—that we are as ignorant of the causes of human behavior as people centuries ago were of the causes of such natural phenomena as disease, famine, and eclipses. We are no further along in our understanding of what causes war, crime, and poverty—and how to end them—than our ancestors. We need, McIntyre says, another scientific revolution; we need the courage to apply a more rigorous methodology to human behavior, to go where the empirical evidence leads us—even if it threatens our cherished religious or political beliefs about human autonomy, race, class, and gender.

Resistance to knowledge has always arisen against scientific advance. Today’s academics—economists, psychologists, philosophers, and others in the social sciences—stand in the way of a science of human behavior just as clerics attempted to block the Copernican revolution in the 1600s. A scientific approach to social science would test hypotheses against the evidence rather than find and use evidence only to affirm a particular theory, as is often the practice in today’s social sciences. Drawing lessons from Galileo’s conflict with the Catholic church and current debates over the teaching of “creation science,” McIntyre argues that what we need most to establish a science of human behavior is the scientific attitude—the willingness to hear what the evidence tells us even if it clashes with religious or political pieties—and the resolve to apply our findings to the creation of a better society.

“At a time when many social scientists have allowed themselves to be cowed by political and religious ideology, Dark Ages reminds us that we have a moral and intellectual obligation to seek the fullest possible understanding of the roots of human behavior. McIntyre has written a beautiful and timely ode to scientific rationality.”
—Sam Harris, author of The End of Faith and Letter to a Christian Nation

“It takes a lot of nerve to insist that a scientific understanding of human behavior should guide our approach to social problems—especially when the alternatives are religion, politics left and right, gut instinct, and every other values guidepost around. Lee McIntyre has that nerve, and makes a clear case for the value of value-free science. This book will make waves.”
—Daniel M. Wegner, Professor of Psychology, Harvard University, and author of The Illusion of Conscious Will

“Dark Ages is a compact, urgent, and brutally frank challenge to ideologues left and right to drop their resistance to learning scientific truths about human behavior and apply the scientific method to social science. Given current signs of deterioration in the human race’s ability to assure its own survival, the long-standing hostility to sometimes unwelcome knowledge must end, and Lee McIntyre’s powerful voice is timely and welcome. It will be instructive to see how his bold message is received, especially on university campuses, where the politicization of social science is in full flower and where some questions remain too hot to ask, much less answer.”
—Harvey A. Silverglate, civil liberties lawyer and writer, and coauthor of The Shadow University: The Betrayal of Liberty on America’s Campuses