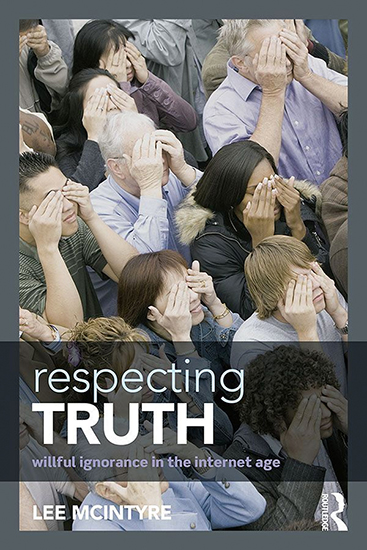 Willful Ignorance in the Internet Age

To see how we treat the concept of truth these days, one might think that we just don’t care about it anymore.

Politicians bellow that global warming is a hoax. An alarming percentage of middle class parents have stopped giving their children routine vaccinations, for fear of a link with autism that has already been debunked. Survey after survey shows that scientific literacy has fallen to the point where nearly half of American adults do not know how long it takes for the Earth to revolve around the Sun. Far from being embarrassed by this state of affairs, many seem defiantly proud of their ignorance; some have even argued that reason and science are just another ideological point of view.

How did we reach this point?

In Respecting Truth, I examine the root of this problem and propose a solution. One might think that the propensity to form true beliefs would have been wired into us by evolution. Yet the last forty years of behavioral science has shown that humans routinely make a series of common and predictable cognitive errors in reasoning. Are we capable of overcoming these? Can we choose to embrace the standards of respecting truth despite such foibles?

I maintain that we can and that the problem at issue is not one of mere ignorance or disbelief, nor even a built-in propensity for mental error, but instead is due to the careless attitude that so many of us have toward the centuries-long creation of reliable standards by which true beliefs are formed.

The phenomenon of disrespecting truth in recent decades is not the result of any sudden slip in human cognitive ability. Throughout history, we have always believed some fairly stupid and wrong-headed things that were subject to later correction by evidence and reason. But I do believe that we have now arrived at a watershed moment in human history, when the entire enterprise of basing our beliefs on facts rather than intuition is truly in peril, due not merely to the volume of our ignorance but to the near-viral speed with which such ignorance can be spread these days, coupled with the recent possibility of selective exposure to media outlets that do nothing to challenge our point of view. In the past, one might have thought of ignorance as the absence of correct information; today it seems just as likely to consist of the presence of false information. For the first time since the Dark Ages, I believe that disrespect for truth has the global power to threaten our way of life on this planet.

In Respecting Truth, I seek to fight back against this. Whether our brains are subject to reasoning mistakes is not up to us. We are born with largely the same cognitive equipment that our forebears used to hunt large game, invent religion, and discover quantum physics. But whether we use these brains to champion the search for truth, or to drag us back into the sort of superstition and ignorance that framed much of human existence before the Enlightenment, is up to us. Truth is based not merely upon having the right beliefs, but upon making good choices about how our beliefs will be formed. We can choose to respect the standards of evidence and reason that have brought us so much progress over the last four centuries or we can continue to erode these standards through contempt until it seems that one point of view is just as good as any other.

Disrespecting truth is not a Republican or a Democratic problem, although political partisanship has made it worse. It is not a Christian or a Muslim problem, although the substitution of faith for reason has been shown throughout history to be a disastrous way to learn the truths about nature (and even ourselves). It is instead a problem that crops up in those moments when we arrogantly decide that it is more attractive to substitute what we would like to believe for what we have evidence to believe.

…where can we turn for guidance?

In Respecting Truth, I propose an answer. If respecting truth is a choice (and not some sort of built-in mental propensity) then it is open to us to embrace a more scientific attitude toward the importance of facts and evidence, just as our ancestors did. Like Copernicus and Galileo, it is possible for us to fight against the forces of superstition and ideology that threaten to overtake the progress of reason. Surely if they could do it—at the dawn of science, when the price for heresy was often persecution or even torture-we can preserve those same standards against today’s zealots, who seek to teach creationism in the public schools and pretend that the polar ice caps are not melting. Indeed today we are fortunate to have tools that were not available to the ancients. The opportunities afforded by crowd sourcing and the instantaneous communication of social media enable us to spread the word much faster when we encounter assaults on the truth. Wherever reason is in danger, we can make this known to others and point out the costs of remaining on the sidelines when the standards of truth continue to be eroded by spin, lies, superstition, and willful ignorance.

More than just a campaign against the outrages of the current moment, Respecting Truth is an argument in favor of preserving the standards by which true beliefs may more readily be formed in the future.

Winner of the INDIEFAB Book of the Year Award in Philosophy

“This is a compellingly written book that addresses a timely issue. It is well researched, tightly constructed, and insightful. It makes for an engaging, informative and eye-opening read. The prose is light and winning, and it provides an expertly guided tour of an issue of profound importance to us all.”
—Andrew Norman, Carnegie Mellon University

“McIntyre is very clear about the overall argumentative structure and he provides excellent examples for each topic under discussion. Although the ideas being discussed are sometimes rather sophisticated, his exposition is very relaxed and casual.”
—Noretta Koertge, Indiana University

“Lee McIntyre identifies the central problem of truth claims today—from global warming and GMOs to evolution and vaccinations—’willful ignorance.’ Respecting Truth should be read by every member of Congress before voting on legislation, and they should do so based on the facts instead of party line. The problem is group think. The solution is having a designated skeptic. I nominate Lee McIntyre.”
—Michael Shermer, Skeptic Magazine