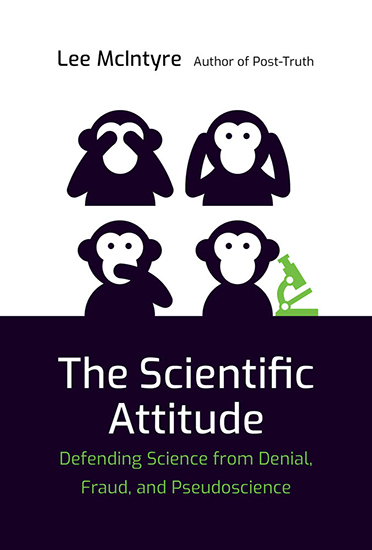 Attacks on science have become commonplace. Claims that climate change isn’t settled science—or that evolution is “only a theory”—reflect basic misunderstanding of how science works. Yet defenders of science often point to its successes without being able to explain exactly why scientific claims are superior. In The Scientific Attitude, Lee McIntyre argues that we can best understand what is distinctive about science not by focusing on its method or achievements, but on those instances of failure to live up to one of its most basic values—”the scientific attitude”—which is caring about evidence and being willing to change our theories on the basis of evidence. The most efficient way to combat science denial, pseudoscience, and scientific fraud is to understand them as violations of a group ideal that is embraced by the community of scientific practitioners.

Praise for The Scientific Attitude

Finalist in philosophy for the PROSE Awards

“After a three-decade career devoted to studying (and often debunking) pseudoscience and science denial I am emboldened by Lee McIntyre’s deeply insightful examination and clarification of what, exactly, science is and how it differs from pseudoscience. In this age of fake news and alternative facts, when creationists, climate deniers, and anti-vaxxers are taken seriously by media and voters, this important book could not come at a more crucial time. Now, more than ever, evidence matters, and the evaluation of evidence is what science does best.”
—Michael Shermer, Publisher of Skeptic Magazine and columnist for Scientific American; Presidential Fellow at Chapman University; and author of Why People Believe Weird Things, The Believing Brain, The Moral Arc, and Heavens on Earth

“The philosophy of science owes something to science, something it has never yet provided, not for want of trying: an explanation of its standing as objective knowledge. We’ve long needed a reliable way to mark the difference between reliable science and seductive pseudoscience. Now we need one to defend the achievements of science against those who deny them by misrepresenting its persistent demands for more and better evidence as weakness instead of strength. Creation science is pseudoscience and climate science isn’t. But we still don’t have a principled explanation of why. It’s Lee McIntyre’s achievement to have finally given us one.”
—Alex Rosenberg, R. Taylor Cole Professor of Philosophy, Duke University, author of How History Gets Things Wrong and The Atheist’s Guide to Reality

“What makes science special? According to McIntyre’s deeply original yet highly accessible new book, it is not any special principle or method. It’s the attitude of those who engage in it. To engage in science is to care about empirical evidence and be willing to change your mind when it doesn’t go your way. This is an important book for our post-truth culture.”
—Michael Patrick Lynch, Director, Humanities Institutes, University of Connecticut and author of The Internet of Us and Know-It-All Society

“This remarkably original book presents not so much a defense of uncertainty and doubt in science as a call to celebrate it—and a method for doing so. Steeped in solid philosophy, McIntyre presents not a simple work around, but a full-on case for what he refreshingly identifies as the ‘scientific attitude’. Forget about the Scientific Method and all the endless arguments about fallibility and proof—it’s the attitude that makes a scientist and that builds a scientific community. What precisely that ‘attitude’ is, and why it’s important, awaits you in the pages of this book.”
—Stuart Firestein, Professor and Chair, Department of Biological Sciences, Columbia University and author of Ignorance: How It Drives Science and Failure: Why Science Is So Successful